11 Ways I Know I’m Back in America

This article is one that’s been sitting in my ‘Drafts’ folder for quite some time. One reason for that is because it’s taken a lot of coming and going from the States to collect each of these 11 pointed thoughts, as they were all jotted down within 1 week of all my past return trips to America. The other reason, is because it’s a pretty blunt testimony of American personality and some of my readers may interpret this piece as a snub to my home country! However, I know many of you will also likely nod heartily with approval, and for that, I salute you. Included among this diatribe as well are a few ways in which I deeply appreciate how things are in the States after being away for so long. No matter which side of the coin you’re on, take my thoughts with a grain of salt and trust me as a seasoned walker of other peoples’ shoes. Here we go!

11 Ways I Know I’m Back in America 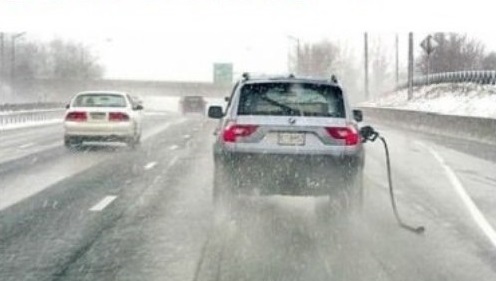 Everyone is in a hurry.

Now, granted I wrote this down upon landing and navigating to the arrivals hall, it would make sense that this should come to mind impulsively, as just about everybody is in a frantic rush at the airport. However, even several days after a return to the US, evidence of the above statement is plentiful. Tailgating on 2-lane roads is rampant, surprisingly though especially on rural roads. Venturing though the aisles at Wal-Mart (ugh, sorry), soccer-moms careen their shopping carts around corners at full speed, either oblivious or simply careless as to who they may accidentally plow into. The great American drive-thru is the pinnacle of life on-the-go: pass by any Chick-Fil-A, Starbucks, or (gag) McDonalds in America and you will see an exodus creeping through, attempting to save those ever-precious 3-and-a-half-minutes by refraining to exit their vehicles.

“But people are in a hurry everywhere in the world. Don’t generalize!” While that may be true, the reason for the rush is different in the States. Although I live in one of the most dangerous driving countries in the world, Thais drive like hell simply because they can. The same goes for Germans on the Autobahn. However, Americans alike will agree that our society is obsessed with tactfully and efficiently saving time – even if it’s literally a couple minutes in the drive-thru – and when questioned “Why the hurry?”, saving time (even when there’s no pressing need to) is often used to justify the persistent hustle. 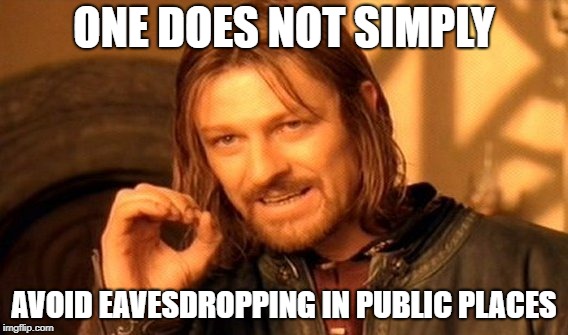 This is something that I noticed right away the very first time I returned America after a 2-year-straight stint in Thailand.

“Oh my god, and then she said let’s just re-schedule for Wednesday… as if my schedule wasn’t packed full already. Ugh.”

“I only got 3 dollahz in tips tonight. 3 dollahz! How da hell I’ma pay my rent this month?!”

It’s as if an on/off switch just flipped on in my brain, and I immediately wanted to turn it off again. Although I am now learning to read, write, and speak Thai better, I still am 100% oblivious to background chatter whenever I am in public. Suddenly being subconsciously bombarded with unnecessary information overload all around me was (and continues to be) reverse culture shock at its finest, every time I return to the States. 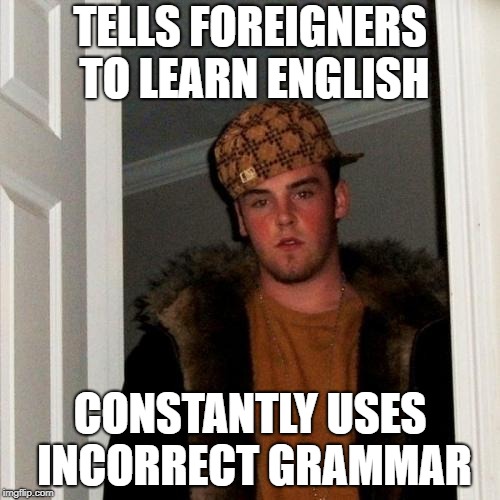 Yeah, I said it. Unfortunately I see quite a lot of this from time to time when I’m back home and it really does disgust me. Whether it be the lambasting of a Hispanic customer by a 7-11 cashier for not understanding that she was being given change, or the overhearing of casual wisecracks about the chicken fried rice maybe having cat parts at the local all-you-can-eat Chinese buffet, I really have heard it all. Actually, I’ve even experienced it myself (as a full-blown American-born citizen with an Irish last name, that just happens to have a slightly auburn skin-tone). Allow me to set the scene:

A few years back, I hadn’t touched down on American soil in LAX but about 25 minutes, and after standing (well, leaning, considering I was totally exhausted) on the left hand side of a moving sidewalk in the airport (without anyone around me whatsoever), a very butt-hurt woman came charging from behind and passed me while spatting “We stand on the RIGHT in this country!” After living in Thailand for 2 straight years before making this particular return trip, it was out of pure instinct that I was indeed, standing on the left. However, that doesn’t give someone the right to be an uncivil, cantankerous, spouting bigot. Sleep deprived and absolutely flabbergasted, this encounter really left me speechless. 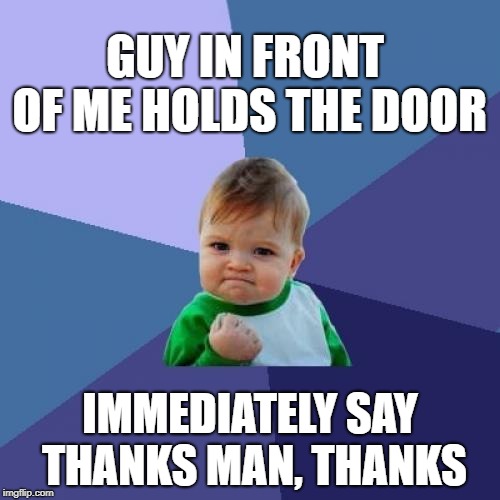 People actually hold the door open for you if you’re right behind them.

To contrast with the previous section; as rude as some people may be to foreigners, 99% of Americans have the decency to hold the door for the person behind them. In fact, if you don’t, you’re certain to receive a death glare from the back for having such little common courtesy. Living in a country where conducting this cordial act is practically taboo no matter how much you’re carrying in your hands (Thailand), I really appreciate this when I’m back in the good ol’ U.S. of A. Small acts of kindness do truly go a long way. 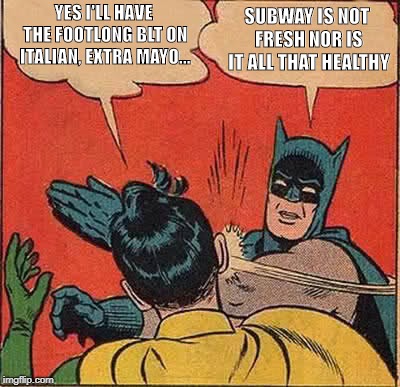 Although you may jump on my back for this one, the proof is unfortunately in the pudding. I scanned across several different websites for the most updated list (2018) of the most obese countries in the world (obesity = BMI, or Body Mass Index of 30 or more), and did find quite the surprise: All top 10 are sparsely populated Pacific Island nations, all with 45% or more of the population considered obese. Closely following at number 11 is Kuwait (I’m guessing also one of the richest countries in the world) and at number 12 is good ol’ America, with just over 36% of the general population considered obese.

Visually, this is the very first thing I notice coming back to America, every. single. time. Nothing else is as conspicuous, and it honestly is the one thing my foreign friends who have visited the US comment upon! As McDonalds, Burger King, KFC, and Taco Bell continue their global conquest, other countries are sure to move up the list; but for now, the USA defends its crown as the fattest country in the world by population. 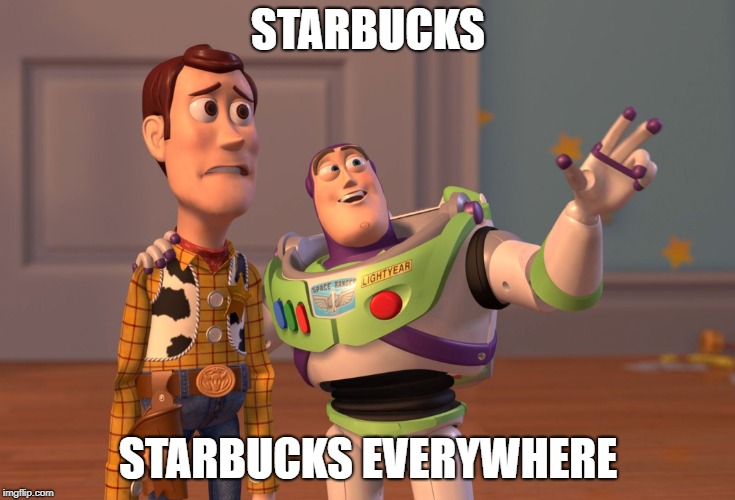 This one really is striking. As Thailand has its 7-11s on literally every street corner and/or within 100 meters of each other, the good ol’ USA has its Starbucks. Though I suppose the same really could be said about McDonalds… or Chick-Fil-A… or Subway… but isn’t Starbucks just so much more fun to rag on?

But hey, their coffee gets the job done in the airport. Unless there’s a McDonalds. 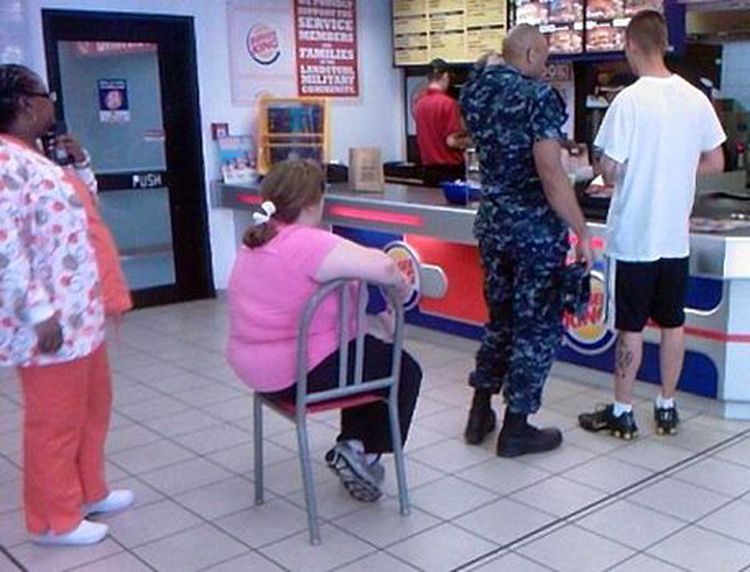 Strangers actually give each other personal space.

In most Asian countries that I have spent the majority of my time the past 6 years, it’s the norm for people to stand 3 inches or less behind the person in front of them in line.* Furthermore, as soon as the cashier is putting together your change, the old lady behind you is nonchalantly shoving you out of the way to unload her god-awful heavy newspaper and toothpaste on the counter. However, in the States you simply won’t see a line (queue, for my loyal British following) where people stand less than 3 feet apart. It doesn’t matter how long the line is either; it can be all the way to the sporting goods section of Wal-Mart and not a single person is giving up those 3 feet! This is one Americanism that I cherish with all my heart.

* (I recently, finally learned why exactly people do this: it’s to keep people from butting them. Literally.) 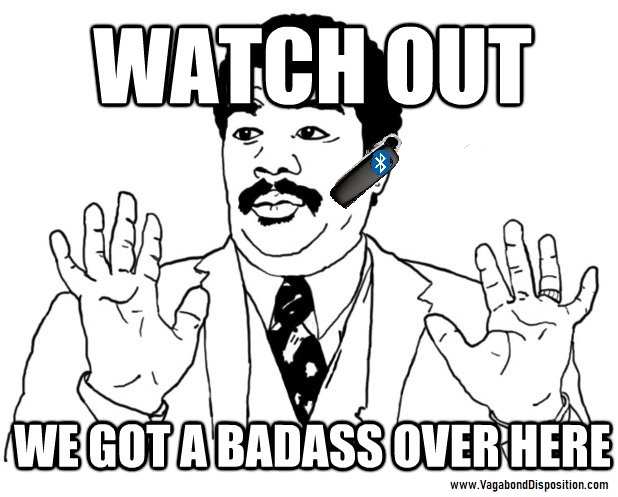 People using Bluetooth even though their hands are completely free.

You know you’ve seen it before: Waltzing around like the CEO of Goldman Sachs, constantly waving around his hands, jabbing his finger in the air, desperately attempting to come off as smug as humanly possible and making sure that every last soul around him is taking notice of his totally inconspicuous Bluetooth conversation. I give you the epitome of pompous douchebaggery that I only see in public places back home.

Hands-free devices were solely designed for driving, cooking, typing (yay telemarketers), doing laundry, changing diapers… you know, when you’re actually busy AND YOUR HANDS ARE FULL. Being in the general vicinity of one of these bozos just makes me cringe. 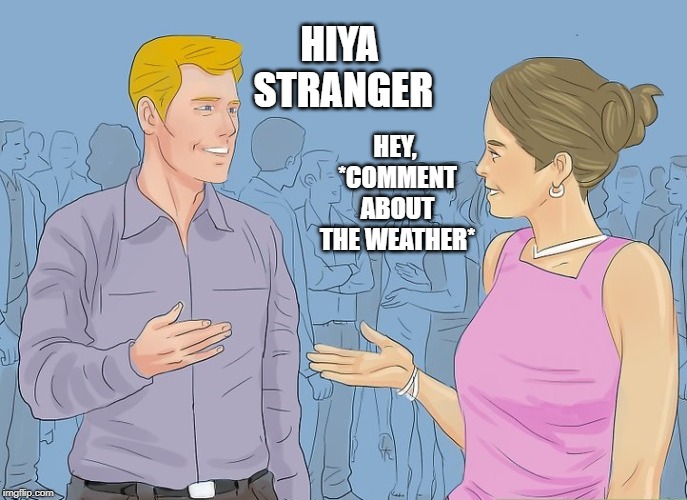 Strangers randomly striking up a conversation.

I recently was running on what’s known as River Road in my hometown; a beautiful stretch of pavement 6 miles long, dotted with old Florida-style homes overlooking the mile-wide Indian River, and a posted speed limit of just 20 mph; yet many motorists tend to violate this. As an SUV passed by at a surprisingly leisurely pace, a fellow pedestrian approaching opposite me looked directly at me and exclaimed, “That is the first car I’ve ever seen going exactly 20 miles per hour!” I nodded in agreement as he shook his head, and continued on his stroll. I never really noticed how approachable and open to conversation my country-folk truly were until I had lived elsewhere for so many years. I suppose it’s not even so much as striking up a conversation, rather than the comfortability of Americans to think out loud to a complete stranger. In any case, it’s a welcomed change that does hit a soft spot for me whenever I’m back in the States.

And last, but certainly not least… 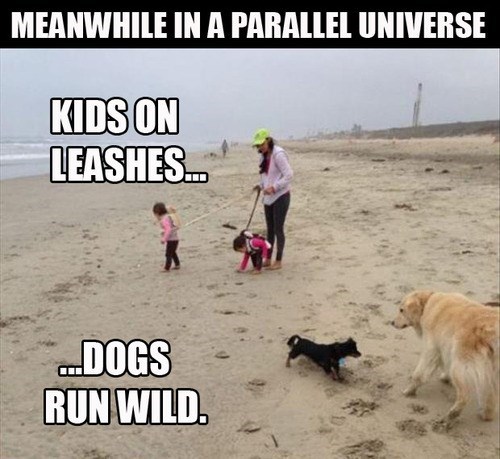